From the Scottish Law Reporter: 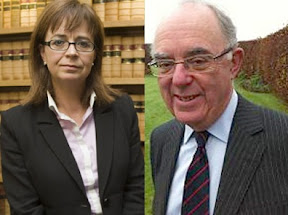 Sheriff Principal was Lighthouse Board Commissioner along with Angiolini for TEN YEARS, failed to declare at trial. Sheriff Principal Edward Bowen who heard Scotland’s most expensive ever Breach of the Peace trial of anti abuse campaigner Robert Green and subsequently found Mr Green guilty of committing a breach of the peace over an attempt to hand out leaflets in Aberdeen during February 2010, is today alleged to have failed to declare a relevant relationship with one of the central characters of the trial, former Lord Advocate Dame Elish Angiolini DBE QC who served as a Commissioner along with Sheriff Principal Bowen on the Northern Lighthouse Board together with a large, if curious gathering of senior members of the legal profession, the judiciary & prosecutors which includes the current boss of the Crown Office, Lord Advocate Frank Mulholland, and his deputy, the Solicitor General, Lesley Thomson.

Detailed documents shown to Scottish Law Reporter reveal Dame Angiolini and Sheriff Principal Bowen were Commissioners at the Northern Lighthouse Board for around TEN YEARS, until both resigned, within 24 hours of each other during 2011. It has now transpired Sheriff Bowen “was the preferred choice of COPFS” to hear the trial against Green during the time the Sheriff served with Angiolini on the NLB.

Several records of meetings held by the Northern Lighthouse Board where the Sheriff & Lord Advocate Angiolini were both present, are available on the NLB’s website here NLB Minutes-of-Meetings The Sheriff & then still serving Lord Advocate attended three meetings on 22 February 2010, 01 June 2010 and 28 February 2011, dates which tally with the period of Green’s arrest & initial hearings.

Unusually there has been no reference made by Sheriff Principal Bowen in the trial to his previous relationship with the former Lord Advocate, who headed the Crown Office when Green was charged with breach of the peace for attempting to hand out leaflets in Aberdeen calling for an inquiry into allegations made by downs syndrome victim Hollie Greig of child abuse. Sheriff Principal Bowen also blocked the appearance of Dame Angiolini at the trial of Green, despite his legal team citing her as a witness, featured on Scottish Law Reporter HERE

Legal experts say the Sheriff should have declared his interest and immediately recused himself from the trial. A solicitor commenting on the matter today was of the opinion Mr Green’s rights as an accused had been breached.

Meanwhile a campaigner speaking to Scottish Law Reporter this morning said there should be an independent investigation to establish whether the Sheriff Principal deliberately concealed the information from the trial.

Mr Green has written more about the apparent conflicts of interest on his web blog : holliedemandsjustice-robertgreensblog

A reminder of previous events in the trial of anti abuse campaigner Robert Green can be viewed in earlier coverage by Scottish Law Reporter HERE and further coverage of the Hollie Greig case along with a recent investigation into the knighthood of Angiolini, apparently recommended by the Scottish Government.

Former Lord Advocate now Dame Elish Angiolini employed Cayman Islands hopping lawyers from Glasgow. Reporting on the background of the case, Robert Green was arrested by Police on 12th February 2010 in relation to a breach of the peace alleged to have been committed in Aberdeen when Mr Green attempted to hand out leaflets regarding the anti-abuse campaign. It was also revealed the then Lord Advocate, now Dame Elish Angiolini had employed private law firm Levy McRae to serve interdicts on Mr Green in connection with his campaign to ‘out’ alleged abusers of downs syndrome victim Hollie Greig. Glasgow law firm Levy McRae who later represented shamed former Glasgow City Council Boss & Cocaine addict Steven Purcell, proceeded to threaten several media outlets & journalists over their reporting of the case, covered by Scottish Law Reporter HERE & HERE. The Purcell scandal caused some newspapers to ‘evaluate’ their relationship with Levy McRae, details of which were featured in a report here : HERE

Justice Secretary Kenny MacAskill worked at, has ties to same law firm used by then Lord Advocate Elish Angiolini in interdict case. As details of the case began to be reported in the wider press, it emerged the Scottish Justice Secretary, Kenny MacAskill had links to LEVY MCRAE, the law firm employed by the then Lord Advocate Elish Angiolini in legal action against Mr Green. Mr MacAskill has made no comment on the fact he served his apprenticeship at Levy McRae and also worked at the firm for a considerable time during his years as a solicitor before he entered politics, while he is thought to have backed Dame Angiolini in her actions at the time. The revelations were reported by Scottish Law Reporter at the time, HERE.

Northern Lighthouse Board – A haven for lawyers, judges and prosecutors

A perusal of the list of Commissioners of the Northern Lighthouse Board reveals some very interesting personalities from the Scots legal world, which include senior Sheriffs, the current Lord Advocate Frank Mulholland and his Solicitor General Lesley Thomson, and a host of others in a curious mix of unexpected legal world dominance.